I bought this when I was with Renee at Ulta a few days after Christmas(okay who else misses Christmas?..I do..) when she was here visiting. I don't actually own a lot of Orlys, shocking.  I think this is my second. What can I say my heart belongs to Zoya! But when I saw this blue, I was wowed! It's so vibrant, and gorgeous! 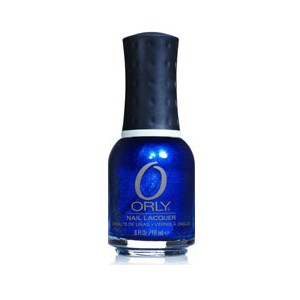 I have a few blues, but nothing that bold! 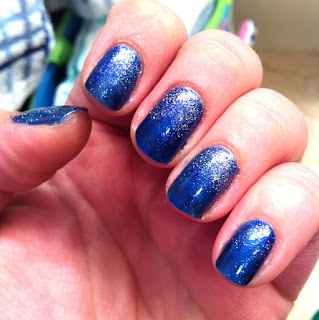 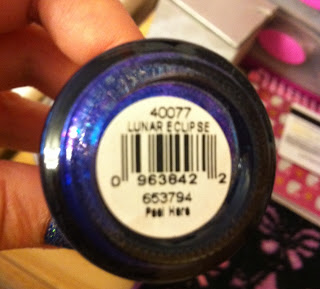 I took pictures in different lights, to show how different the polish is. I have to say this is not an easy polish to photograph! I added some micro glitter lamé polish that I bought in Japan a few summers ago. It's a great polish to use when you want to do a gradient on your nails. I love to look at the bottle and see the holographic beauty that it is... ahhh( yeah that isn't sad at all..) but I must get back to my nanny duties and say good bye for now!

Here's the manicure I mentioned the other day, my first Konad success! Only because it wasn't a Konad stamper.. it was the As Seen On TV Salon Express stamper from their kit sold at Rite Aid. And ok it isn't actually my first success, it's my second..but it's the first complete manicure with this kit, my first try that came out well was just some test nails. Since the Konad stamper just doesn't seem to work for me, I'm willing to trade it and the nail scraper to a new home, since some people have much more luck with it than others (like Erika and I.) I really like how it came out, I love the chrome purple/silver glitter combo. I used it in a past manicure as well. The leopard design is from Konad plate m57. As the title states, I used the NYC Foil Nail Enamel in Royal Foil that Erika gave me over Sally Hansen Teflon Tuff Secrets Frost, and I topped it off with Coffret D'or gel look topcoat. I was so proud of myself, nail stamping is actually lots of fun when it actually works! Konad: NYC Royal Foil over Sally Hansen Secrets Frost, a photo by KitaRei on Flickr.
Royal Foil looks awfully like Sally Hansen Sapphire Chrome (which is actually purple, so I have no idea why they named it that.) This could be a dupe for it, but I'm not sure if they came out at the same time.. this is a vintage NYC polish so it's very possible. I should whip them out and compare them :) 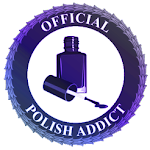 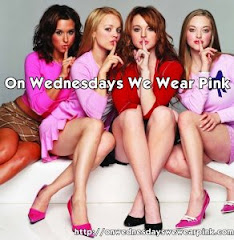